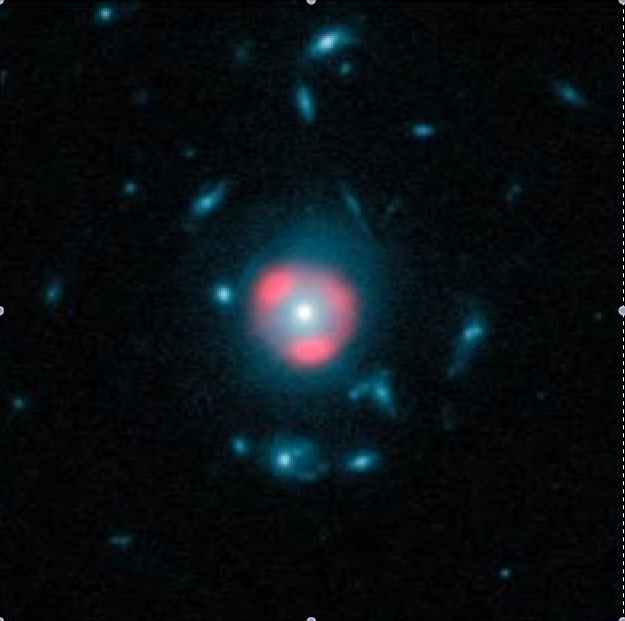 Strongly lensed starforming galaxies at cosmological distances provide a unique laboratory to study galaxy evolution in great detail due to the boost in flux and the increased spatial resolution provided by the gravitational magnification from lensing. In the past studies of strongly lensed sources have been limited to a handful of systems due to their rareness and the lack of large-scale mm/submm surveys to detect these rare sources in significant numbers. This has changed dramatically over the past years with the advent of large area surveys from Herschel and the South Pole Telescope (SPT). These surveys have detected hundreds of strongly lensed high-redshift dusty starforming galaxies (DSFGs).

In a successful ALMA cycle 0 proposal we awarded observing time for high spatial resolution (0.5'') imaging to determine the lens magnifications of the DSFGs (47 sources). Integration times of only one minute per source are adequate to show that the sources are resolved into arcs or Einstein rings -- hallmarks of gravitational lensing -- in most sources. Using a lens model we are able to determine the magnification of our sources and derive their intrinsic luminosities. 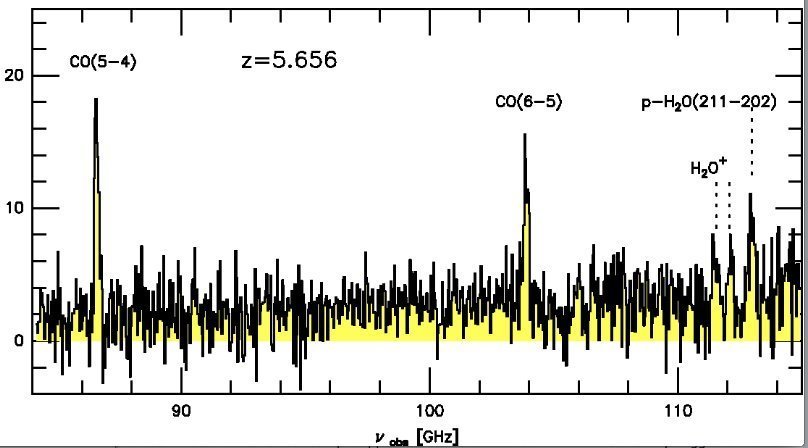 Using the Atacama Large Millimeter/submillimeter Array, we have conducted a blind redshift survey in the 3 mm atmospheric transmission window for 26 strongly lensed dusty star-forming galaxies (DSFGs) selected with the South Pole Telescope. Our 3mm scans resulted in 44 securely detected spectral line features including the most distant detection of H2O and H2O+ at z=5.7 to date. Our sample mean redshift is = 3.5. This is in contrast to the redshift distribution of radio identified DSFGs which have a significantly lower mean redshift of  =2.3, and for which only 10%–15% of the population is expected to be at z > 3. The redshift distribution of our sample appears almost flat between z = 2–4. Our study suggests that previous spectroscopic redshift surveys of DSFGs based on radio identified sources are likely biased toward lower redshift and have missed a large fraction (~50%) of the DSFG population at redshifts z > 3.

The LABOCA ECDFS Submillimetre Survey (LESS) is a sensitive 870 survey of the Extended Chandra Deep Field South (ECDFS) with submm LABOCA camera on the APEX telescope. LESS covers the full 30′ × 30′ field size of the ECDFS and has a uniform noise level of 1.2 mJy per beam. LESS is one of the largest contiguous deep submillimeter survey undertaken to date. The survey yields the a catalog of126 submillimeter galaxies (SMGs) detected with a significance level above 3.7σ.

Recent results have focused on the counterpart identifications in the radio and MIR, the redshift distribution and the clustering of the LABOCA detected sources. The LESS redshift distribution (=2.2) turns out to be consistent with previous SMGs studies focusing on radio/MIR identified SMGs. The observed clustering indicates that the low-redshift descendants of typical submm galaxies (SMGs) are massive (∼2–3L∗) elliptical galaxies at the centers of moderate- to high-mass groups, consistent with previous studies and with observations of local massive elliptical, which indicate that they formed the bulk of their stars at z > 2 and have been largely passive since. The clustering of SMGs is very similar to that observed for QSOs at the same redshifts, supporting evolutionary scenarios in which SMGs and QSOs are triggered by a common mechanism. 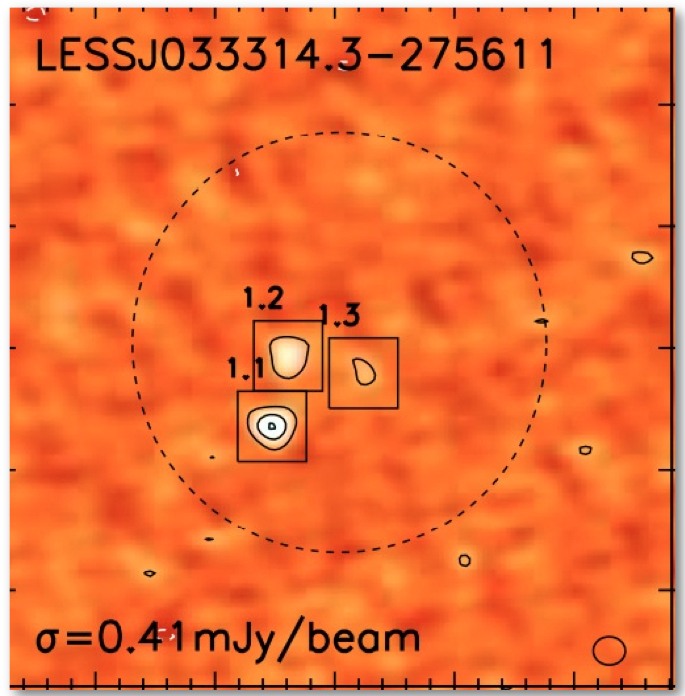 Based on our initial low-resolution observations from the LESS survey we have awarded ALMA observing time in Cycle-0 to produce the first complete high-resolution follow-up catalog of 126 SMGs in LESS. Our 870μm survey with ALMA has produced maps ∼3× deeper and with a beam area ∼200× smaller than the original LESS observations, doubling the current number of interferometrically–observed submillimeter sources. The high resolution of these maps allows us to resolve sources that were previously blended and accurately identify the origin of the submillimeter emission. We show that our ALMA-derived SMG counts broadly agree with the submillimeter source counts from previous, lower-resolution single-dish surveys, demonstrating that the bulk of the submillimeter sources are not caused by blending of unresolved SMGs. The difficulty that well-constrained theoretical models have in reproducing the high- surface densities of SMGs, thus remains. However, our observations do show that all of the very brightest sources in the LESS sample, S870μm > 12 mJy, comprise emission from multiple, fainter SMGs, each with 870μm fluxes of <∼ 9 mJy. 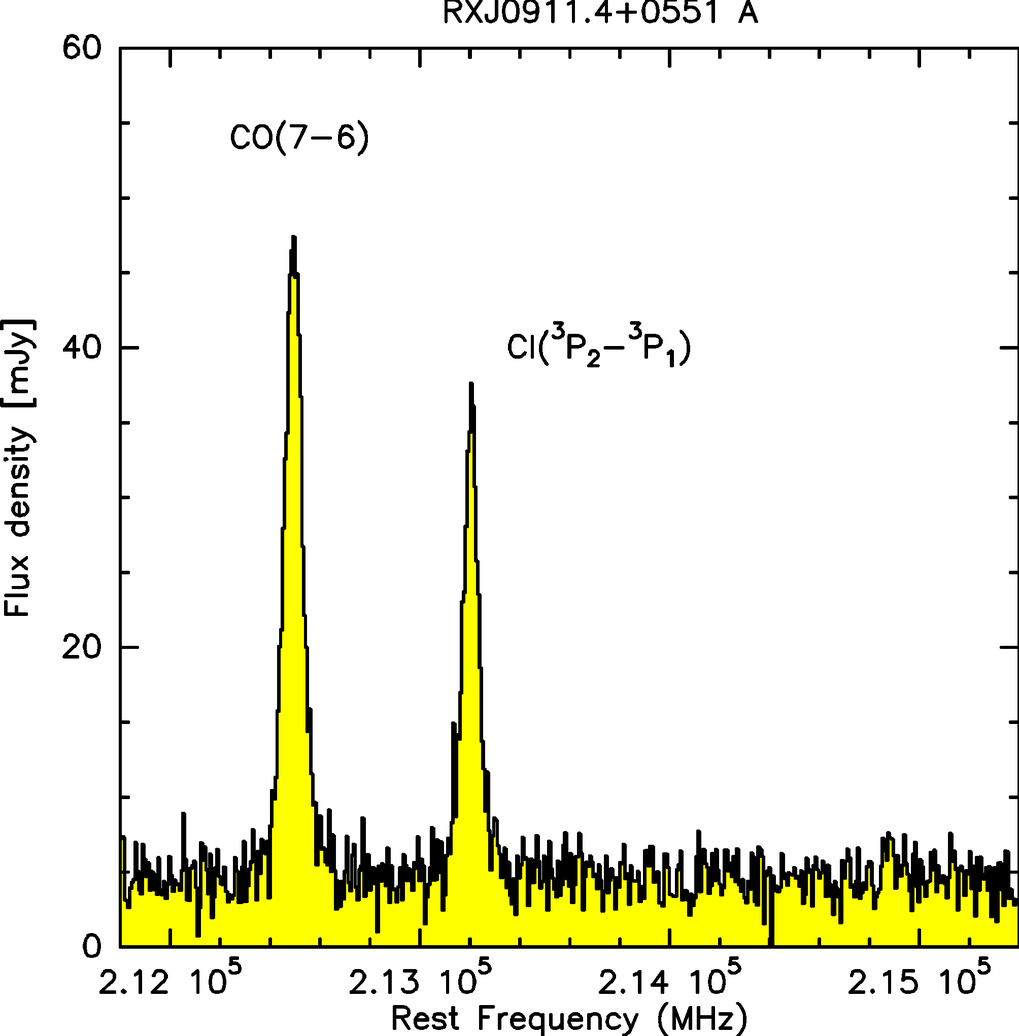 The standard model of physics is built on the fundamental constants of nature, but it does not provide an explanation for their values, nor does it require their constancy over space and time. We have set a limit on a possible cosmological variation of the dimensionless proton-to-electron mass ratio μ by comparing transitions in methanol observed in the early universe with those measured in the laboratory. From radio astronomical observations of PKS1830-211 with the 100-m telescope at Effelsberg, a constraint of ∆μ/μ = (0.1 ± 0.8) × 10-7 could be deduced at redshift z = 0.89, corresponding to a look-back time of 7 billion years. This is consistent with a null result and by far the most accurate measurement of this basic parameter at z ~ 1.