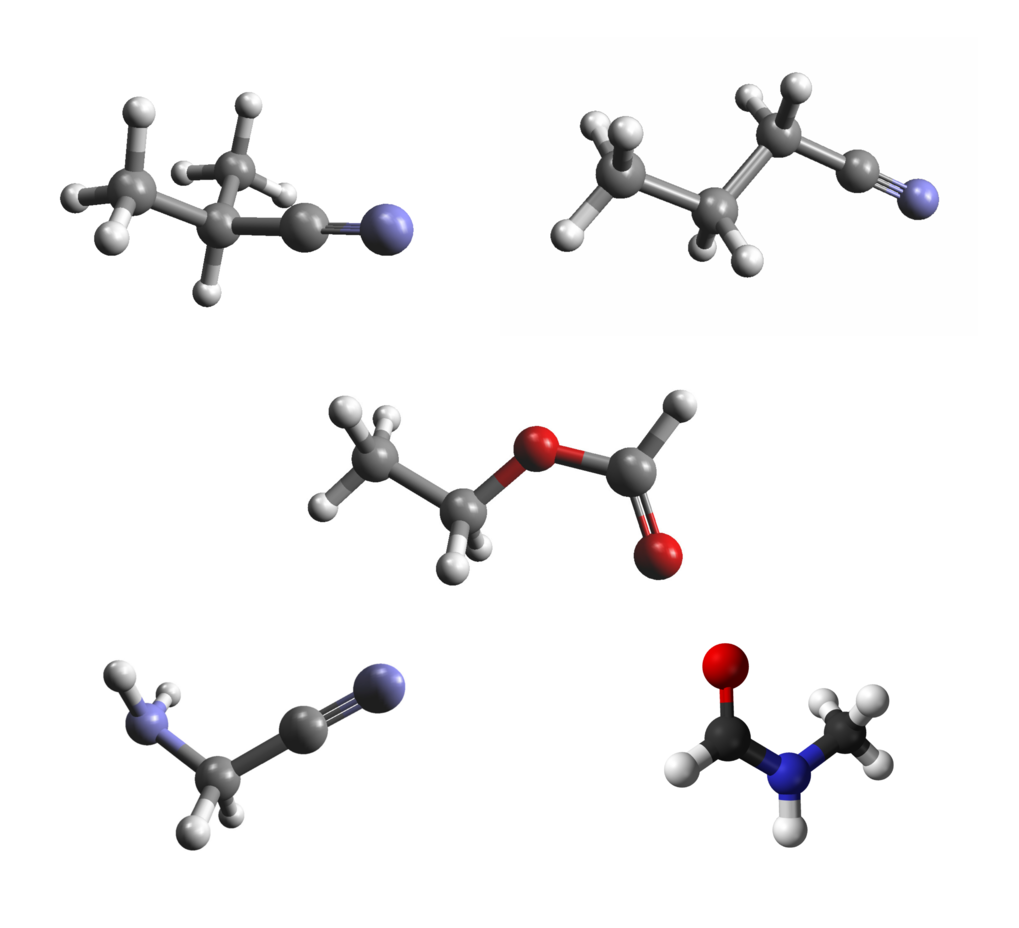 Organic molecules detected toward Sgr B2 with ALMA ... [more]

More than 70 complex organic molecules, that is organic molecules consisting of at least 6 atoms, have been identified in the interstellar medium since radio astronomy took off in the late 1960s. These molecules are detected thanks to their rotational emission in the radio and mm/submm wavelength range. Most of them are thought to form at the surface of dust grains and can be subsequently observed in the interstellar gas phase once they sublimate, for instance as a result of the heating provided by a nascent star. Closer to us, meteorites found on Earth are known to contain hundreds of complex organic molecules of extraterrestrial origin, among others more than 80 different types of amino acids which are the building block of proteins. The simplest amino acid, glycine, has even been detected by the Rosetta mission in situ in comet 67P/Churuyumov-Gerasimenko. Comets represent the most pristine material in our solar system, with a chemical composition at least partially inherited from the interstellar medium.

The EMoCA project is a sensitive spectral line survey performed with the powerful mm/submm interferometer ALMA in Chile. The survey targets Sagittarius B2(N), one of the most active star forming regions in our Galaxy that is located close to the Galactic center. EMoCA aims at exploring the degree of chemical complexity that can be reached in the interstellar medium, understanding the chemical processes that lead to such a complexity, and establishing connections to the chemical composition of comets and meteorites. Thousands of spectral lines corresponding to rotational transitions of numerous complex organic molecules are detected and imaged in the EMoCA data. This survey has already led to the detection of several new complex organic molecules and new high-mass young protostellar objects the chemical composition of which we study in detail. The identification of the molecules is done in close collaboration with spectroscopists who provide the much needed spectral line catalogs.

The still poorly understood early stages of massive star formation (MSF) are presently a pressing topic in astronomy. Since they evolve quickly, are rare and at larger distances than their lower mass siblings, only Galaxy-wide surveys can find significant samples of massive stars in their early stages. Such samples are needed since the evolutionary sequence in high-mass star formation and the associated timescales are not understood yet. In the past, samples biased towards evolved stages of the formation process, e.g. based on IR colour criteria compact cm continuum or maser emission were successfully studied and yielded important insights into these later stages. Complementary, colder objects were revealed in mid-infrared surveys as so-called infrared dark clouds.

Since high density clumps consist of gas which is about to form star clusters, there is a strong need for large scale surveys in a (cold) dense gas tracer such as the submm dust continuum. This led us to conduct the first unbiased survey of the inner Galactic Plane at 870 ~m (ATLASGAL, Schuller et al. 2009) to study (i) massive star formation throughout the Galaxy, (ii) the pre stellar/precluster initial mass function down to a few solar masses, (iii) to probe the large scale structure of the cold ISM and (iv) to associate the cold dust with Galactic surveys that have been conducted at other wavelengths with the VLA and Spitzer. At 870um and from a site in the southern hemisphere, it is complementary to the lower angular resolution 1.1mm Bolocam Galactic Plane Survey in the north and the ongoing Herschel Hi-GAL survey. Based on ATLASGAL, already almost 30 papers have been published, some with immediate strong impact (e.g. the Deharveng et al. 2010 study of dense clumps associated with infrared bubbles). A considerable fraction of the data is now publicly available to the community and a first compact source catalogue has recently been published (Contreras et al. 2013). 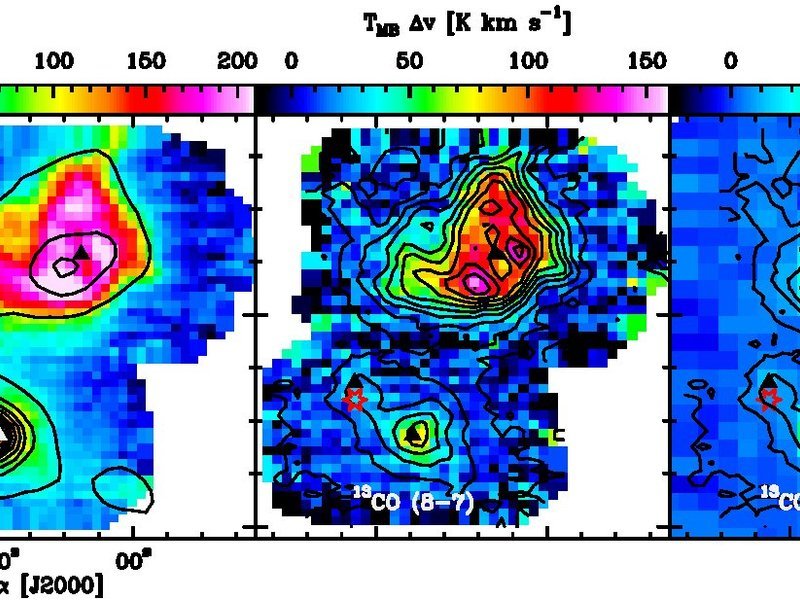 As part of the Guaranteed Time Key Program for the Herschel Space Observatory "Water in Star-forming regions with Herschel" we work on the larger scale environment of some of the brightest massive star forming regions.

Most studies of high-mass star formation focus on emission peaks at infrared or submillimeter wavelengths, which correspond to peaks in the temperature and/or mass distribution. However, the physical properties of their larger scale environment are poorly known. The aim of our work is to characterize the effects of clustered star formation and feedback of massive stars on the surrounding medium by studying the distribution of warm gas in regions of massive star formation. In the framework of WISH, we mapped six sources in several H2O transitions with the HIFI and PACS instruments onboard Herschel and in different transitions of CO isotopologues with the APEX telescope and HIFI on Herschel. 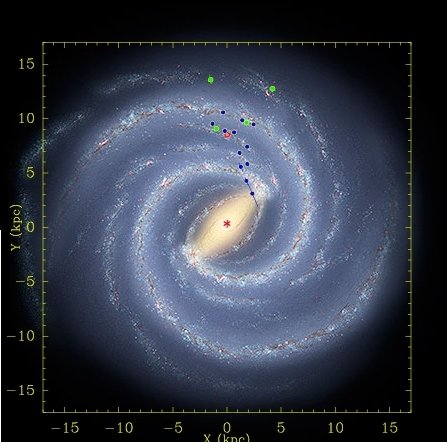 The BeSSeL Survey (Bar and Spiral Structure Legacy Survey) is a VLBA Key Science project to study the spiral structure and kinematics of the Milky Way. The Survey is named in honor of Friedrich Wilhelm Bessel who measured the first stellar parallax in 1838. We will accomplish this by determining distances, via trigonometric parallax, and proper motions of star forming regions in the Milky Way.

The target sources are methanol and water masers that are associated with young massive stars and compact HII regions that trace spiral structure. With accurate distance measurements we will locate spiral arms, and with absolute proper motions we can determine the 3-dimensional motions of these massive young stars.

Over the past decade, we have developed and tested the techniques needed to achieve better than 0.03 mas relative positional accuracy between maser sources and background QSOs at each epoch. Before beginning this project, we determined trigonometric parallaxes to 11 star forming regions with accuracies of order 0.01 mas. We also measured absolute proper motions with accuracies of order 1 km/s. These results have been published in a series of papers in the Astrophyscial Journal.

The Megamaser Cosmology Project (MCP) is based on single dish and VLBI observations of 22 GHz H2O maser disks surrounding active galactic nuclei in galaxies. It is pursuing the ambitious goal of determining the Hubble constant and therefore to improve the extragalactic distance scale and to constrain the geometry of the Universe and the nature of dark energy. 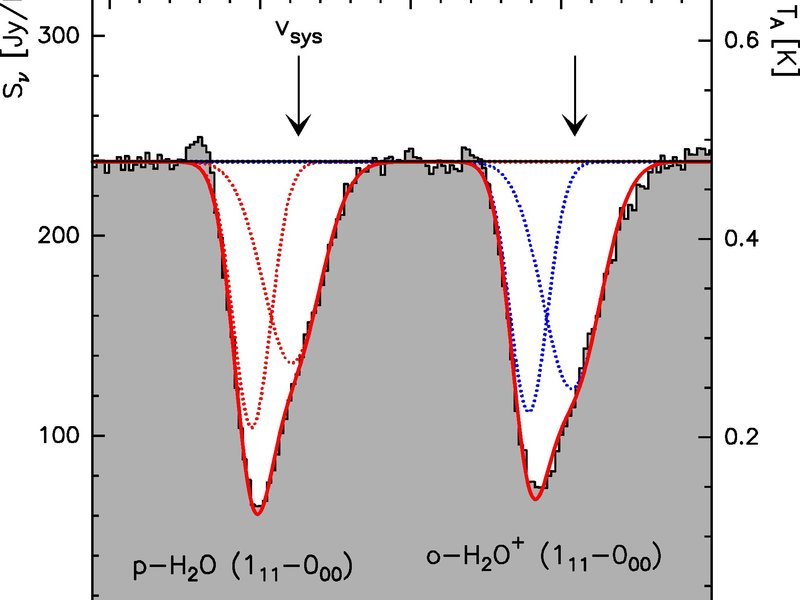 The Hifi EXtraGAlactic key project (HEXGAL) is a Herschel guarantee time key project lead by the MPIfR. HEXGAL uses the superb spectral resolution of the HIFI instrument to obtain velocity resolved spectra in a set of molecular key transitions to study the excitation and the chemical composition in the nuclear of nearby galaxies and the in center of the Milky Way. Among other aspects HEXGAL aims to study the water emission in the nuclear region of galaxies for the first time. 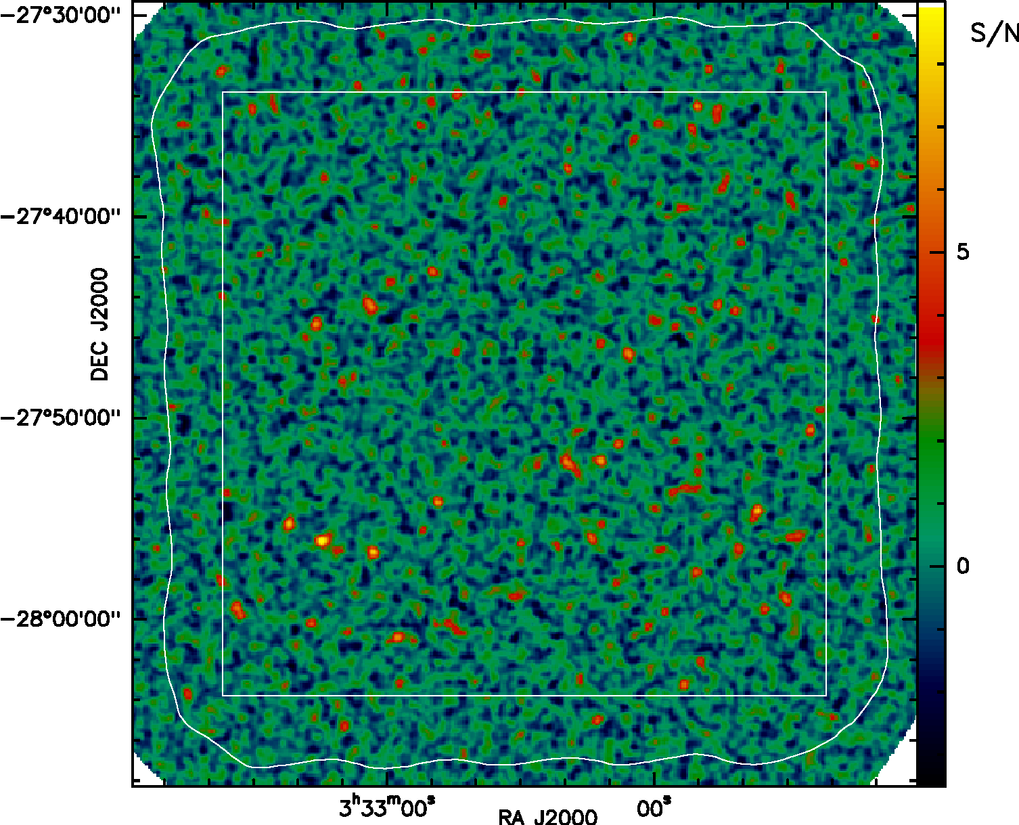 LESS, the LABOCA ECDFS Submillimetre Survey aims to study the evolution of sub-millimeter galaxies in the distant universe and to put them into context to galaxy evolution. The project is and international collaboration with leading contributions from scientists in Durham (UK), at the MPIA in Heidelberg and the MPIfR in Bonn. The project focuses on a multi-wavelength characterization of high redshift starforming galaxies from radio to x-rays including observations from APEX, the EVLA, ALMA and the VLT among others. 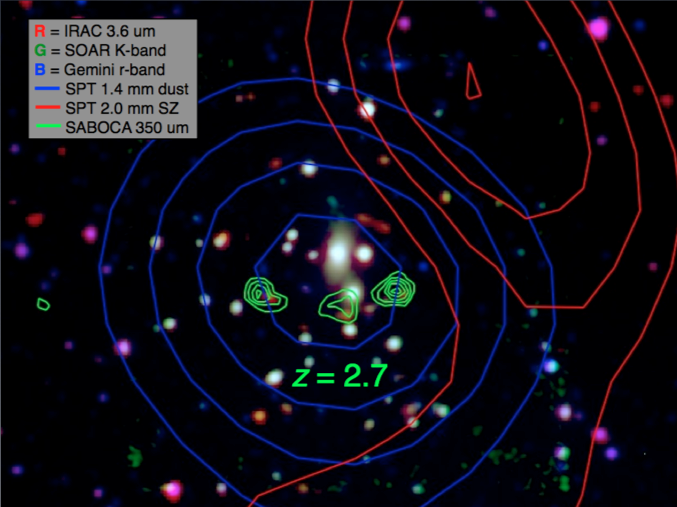 The South Pole Telescope (SPT) submm Galaxy research is a collaboration between different institutions in the US, ESO and the MPIfR Bonn. The project focuses on the investigation of strongly lensed galaxies at high redshift discovered in the large area SPT survey. It combines single dish (SPT, APEX), space based (HST, Herschel) and interferometric (ALMA, ATCA) observations to study the intrinsic galaxy properties of high redshift starforming galaxies at multi-wavelength.